Click Here for our short breaks and special offers 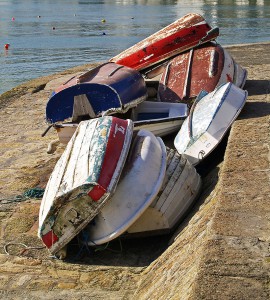 There's so much we could tell you about the fine golden sands and the clear blue ocean, the way the sunlight flickers over the cottages and quays, about the galleries, the gardens, the cafes and restaurants.

Would you like to know about the ancient sites and stones, the famous people and buildings? We could tell you how easy it is to travel here and how Cornwall's wonders are all close by.

St Ives, the most famous of Cornish holiday towns, loved for generations, is easy to reach by road or by air and easy by train, too, along one of the most spectacular railway journeys in Britain to crystal blue waters, golden sands and a warm welcome. We nearly forgot the mild sub-tropical climate, warmed year round by the Gulf Stream!

Life here is cradled around the harbour where boats still land good catches of freshest fish for the local restaurants to nourish you with. Brought ashore on the ancient granite quays, the catch is of the highest quality for your dinner plate or for the tables of some of Britain's finest restaurants. A maze of tiny cobbled streets to wander through, lined by fishermen's cottages, with a breathtaking seaside vista to greet you at the end of each one. 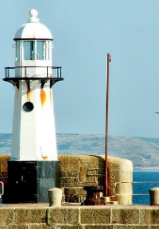 St. Ives have won the 'Britain in Bloom' competition many times and several European titles too. There's a blaze of colour all around the town: houses smothered in baskets of blooms, parks and public areas a rich spectrum of radiant colours. Our mild climate and almost frost-free winters makes it possible to grow plants and shrubs normally native to semi-tropical countries hundreds of miles further south. Try us for a winter break in Cornwall!

Take a leisurely walk along the coastal footpath, perhaps, south to Lelant with the opportunity to return by branch line train or opt for a more energetic hike west towards Zennor and Gurnards Head. Soak up the sounds and images of the mythical and rugged land. Paint, pencil and clay. St Ives is renowned for its art and rightly so as there are workshops, studios and galleries everywhere. Often you will find painters hurrying to finish a sketch before the light changes or before the waves wash their palettes away!

A donation from each booking is made to each of these important charities:

This website uses cookies to improve your experience while you navigate through the website. Out of these, the cookies that are categorized as necessary are stored on your browser as they are essential for the working of basic functionalities of the website. We also use third-party cookies that help us analyze and understand how you use this website. These cookies will be stored in your browser only with your consent. You also have the option to opt-out of these cookies. But opting out of some of these cookies may affect your browsing experience.
Necessary Always Enabled
Necessary cookies are absolutely essential for the website to function properly. This category only includes cookies that ensures basic functionalities and security features of the website. These cookies do not store any personal information.
Non-necessary
Any cookies that may not be particularly necessary for the website to function and is used specifically to collect user personal data via analytics, ads, other embedded contents are termed as non-necessary cookies. It is mandatory to procure user consent prior to running these cookies on your website.
SAVE & ACCEPT
NAVIGATION